Host Ellen DeGeneres continues to deliver uplifting, inspiring, and hilarious experiences to viewers. Ellen's talent, personal warmth and insight have earned her recognition as a global entertainer and household name. Through her show, she brings her humor and talent for tackling topical issues into viewers' lives with her distinctive style touching every aspect of the show.

The show continues to bring even more star power this season with top guests including Justin Bieber, the cast of "Jersey Shore," Usher and many more. Ellen will tackle even more discussions of the day, allowing viewers to connect with the world through Ellen's wide perspective on a number of important issues.

"The Ellen DeGeneres Show" has become the daytime destination for laughter and fun. Bringing a refreshing perspective to daytime television, Ellen's engaging personality and unique take on everyday life invite a relaxed and candid environment and allow her guests to engage in entertaining and thoughtful discussions on topical issues. The environment also often leads to having moments of unpredictable fun, illuminating celebrities "in the moment," and saying and doing things viewers won't experience anywhere else. When members of Hollywood's A-list and Ellen get together, anything can happen -- from dancing with First Lady Michelle Obama to Christmas caroling with Britney Spears,l to catching George Clooney after setting numerous "Clooney traps."

In May 2010, Ellen announced that she was going to start a record label that she named eleveneleven. Ellen and Telepictures are partners in this new venture, which will find new acts and provide a platform on the talk show. The first release will be 12-year-old internet singing sensation Greyson Chance.

During its freshman season, "The Ellen DeGeneres Show" ranked at the top of critics' lists, withPeople, Entertainment Weekly, The New York Times, USA Today, and TV Guide all citing the daytime talker as one of the best programs of 2003. Ellen continues to be featured in such publications as USA Today, Time, TV Guide, The New York Times, Vanity Fair, Entertainment Weekly, and US Weekly, and it has been the cover subject in W, People, Parade, Life, Allure,Redbook, Ladies' Home Journal and Los Angeles Magazine.

The syndicated daytime talker has been embraced by viewers, critics and the entire entertainment community. The show won a GENESIS Award in the Talk Show Category and PETA (People for the Ethical Treatment of Animals) named Ellen DeGeneres its Woman of the Year. The show has also won the Johnny Carson Producers of the Year Award in Variety Television in 2005 and 2006 from the Producers Guild of America. DeGeneres recently won two Teen Choice Awards for Choice Comedian and Choice Twit, and won the People's Choice Award for Favorite Talk Show, a new mobile voting category, making this her eleventh People's Choice Award.

"The Ellen DeGeneres Show" has been acclaimed for spotlighting the host's compassion and humanitarian efforts. The show has raised over $10 million to improve the lives of New Orleans residents and partnered with Brad Pitt's "Make it Right" foundation to help rebuild in New Orleans' lower Ninth Ward. The show has also dedicated a special episode to Breast Cancer Awareness Month, and DeGeneres has served as spokesperson for General Mills' breast cancer awareness initiative, "Pink for the Cure." The show's annual Toys for Tots drive has raised significant funds and awareness for the cause over the past six seasons. Ellen has also hosted the very successful "American Idol" special "Idol Gives Back," which raised money for children in extreme poverty in America and Africa.

With more than two decades of experience as a stand-up comedian, actress, Emmy Award winner and host of major award shows, including the Grammys, the Primetime Emmys, and the highly-rated 79th Annual Academy Awards, DeGeneres was nominated for a Primetime Emmy Award for Outstanding Individual Performance in a Variety or Music Program for her Oscar hosting duties.DeGeneres has the proven comedic skills to connect with viewers with her relatable approach to daily life. In 2003, she added to her success with her starring role as Dory in the smash hit animated film "Finding Nemo," and the publication of her second best-selling book, The Funny Thing Is…

DeGeneres was included in the Forbes Top Five Most Influential Women in Media and was voted Best Daytime Tal, Show Host by Parade.com readers. In addition, DeGeneres has been voted favorite TV personality on The Harris Poll's annual favorite television star list, beating out Oprah Winfrey and Jay Leno. DeGeneres was included in MSNBC's "Power players who shape your TV habits." She was also honored as the Television Week syndication personality of the year, voted number one in Oxygen's "50 Funniest Women Alive" special (in the company of such comedic legends as Carol Burnett and Lily Tomlin), and included in Time magazine's 100 most influential people.

Originating from Los Angeles, "The Ellen DeGeneres Show" airs in national syndication, including on the NBC Owned and Operated Television Stations Group.

"The Ellen DeGeneres Show" is produced by A Very Good Production and WAD Productions, Inc., in association with Telepictures Productions, an industry-leading and Emmy Award-winning producer of syndicated programming, and it is distributed by Warner Bros. Domestic Television Distribution. 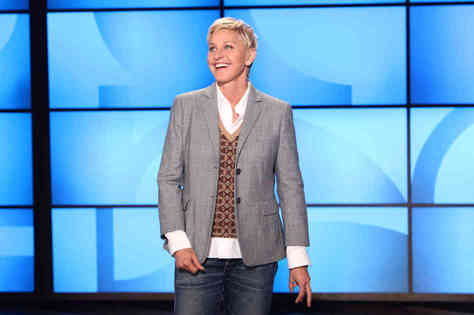